This looks like a good option for urban areas. 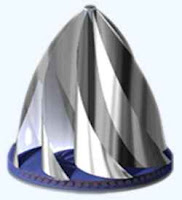 It's a "Magnetically-Levitated Axial Flux Alternator with Programmable Variable Coil Resistance, Vertical Axis Wind Turbine' , and it has just come on the market. Designed by Thomas Priest-Brown and Jim Rowan in Canada and manufactured in Texas, it"solves 11 different problems that previously limited the development of vertical-axis wind turbines for generation of electricity ."

The center hub floats on a magnet, and the coils that generate the power are at the outer ring, with magnets at the tips of the blades flying over them at high speed. It is designed for home installation in urban settings; It is only 4 feet high, so neighbours are unlikely to complain about its appearance. We asked about issues with ice and snow, and were assured that there was no problem. We also asked about noise (often a complaint) and was told that it was inaudible.

Unlike normal turbines, it doesn't mind a little turbulence, works well in developed areas, and gets an extra kick from something called "the roof effect" -evidently "A roof with a 10-foot vertical rise and a 30% angle will provide nearly a 200% increase in the amount of wind energy that is available to be turned into electricity. Compared to the same turbine just sitting on a pole, the roof effect increases the power yielded by operation of the wind turbine dramatically."

Mag-Wind Vertical Axis Turbine for your Home : TreeHugger
at 12:55 PM

Although the wind vertical axis turbine gets some additional press these days, various engineering analyses have determined that there is generally too much stress at the blade root and sever damage occurs to the vertical turbine blades over time on the wind vertical axis turbines. The best approach is to use a horizontal wind turbine which can be easily made by any competent DIY homeowner for very little money and in very little time with common hand tools found around almost any home.

For more information on DIY wind projects, go to: NetSolarAndWind.com